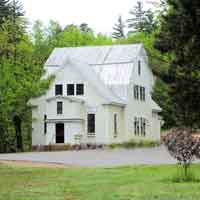 As early as 1772 a road had been constructed through Pinkham Notch although the first recorded settlement in what is now Jackson dates to 1778 and the arrival of Benjamin Copp and his family. Other settlers in our area came from Madbury, New Hampshire, and they called their new settlement New Madbury. At the time of incorporation on December 4, 1800, Adams was adopted as the town name in honor of President John Adams. It remained so until 1829, when the name was changed to Jackson.

While the record, official or otherwise, is unclear as to who instigated the name change, it was motivated in response to the election of President Andrew Jackson, the hero of the Battle of New Orleans. The popularity of President Jackson is reflected in that only one vote was cast for keeping Adams as the name. In 1853 Jackson was disannexed from the Coos County to Carroll County which had been established in 1840.

In the early 19th century, the town’s hillsides afforded good grazing and large numbers of cattle and sheep were raised in Jackson. In the mean time, people from the cities were visiting the White Mountains in increasing numbers. In the early 1800s Rosebrook established the first inn at what is now Fabyan’s. The inn was later taken over by Rosebrook’s grandson, Ethan Allen Crawford, a pioneer in the summer hotel business. Among those attracted to the White Mountains were writers, scientists, artists and statesmen.